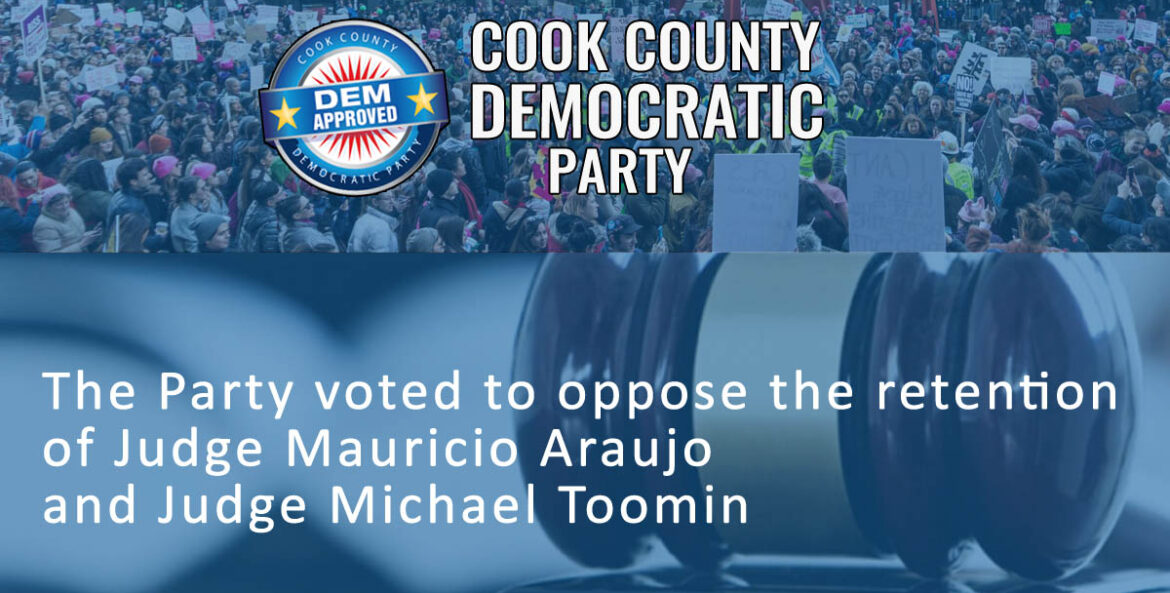 The decision by the Central Committee of the Cook County Democratic Party to pull its support for two judges seeking retention was based on a thorough, thoughtful and exhaustive report from the Judicial Retention Committee as part of an effort to root out judges who fail to live up to the ethics expected of the judiciary and who continue to mete out sentences that are more punitive than redemptive.

After much discussion, the Central Committee voted to oppose the retention of Judge Mauricio Araujo and Judge Michael Toomin as presiding judge of the Cook County Juvenile Justice division in the general election. The vote to not retain Judge Araujo was unanimous and all but two members voted against retaining Judge Toomin.

Juvenile justice advocates agree with the Cook County Democratic Party’s decision about Judge Toomin who they said is out of touch and leading our juvenile justice system with an outdated “scared straight” approach to our children.

“Judge Toomin fails to temper justice with mercy and compassion, which is the whole point of juvenile court…it’s about second chances,” explained Elizabeth Clarke, president and founder of the Juvenile Justice Initiative. “He leans toward punishment as opposed to compassion.”

Toomin, who is 81 years old, has served in his current position since 2010. He was last up for retention in 2014. The Democratic Party formed the Judicial Retention Committee in 2018. Before its formation all judges automatically received the party’s endorsement.

Attorneys working with juveniles during the COVID-19 pandemic say Toomin’s temperament has been especially “problematic.”

“I found it really problematic that the presiding judge was reviewing pleadings before they were filed and blocking motions,” described Christine Law Merriman, staff attorney at the Lawndale Christian Legal Center. “I had never heard of that before. It’s the judge’s job to make a motion after something has been filed, but never seen any kind of judge stop a lawyer from making a motion or any kind of argument.”

The committee said it withdrew support from Judge Araujo because of multiple, credible and corroborated allegations of sexual harassment against him. In addition, he was found unqualified by multiple bar associations.

“Judge Araujo was removed from his court assignment, reassigned to administrative duties and, following an investigation, the Judicial Inquiry Board filed a complaint against him,” stated Eamon Kelly, chair of the retention committee in a report to committeepeople.

Kelly said these decisions were not made lightly.