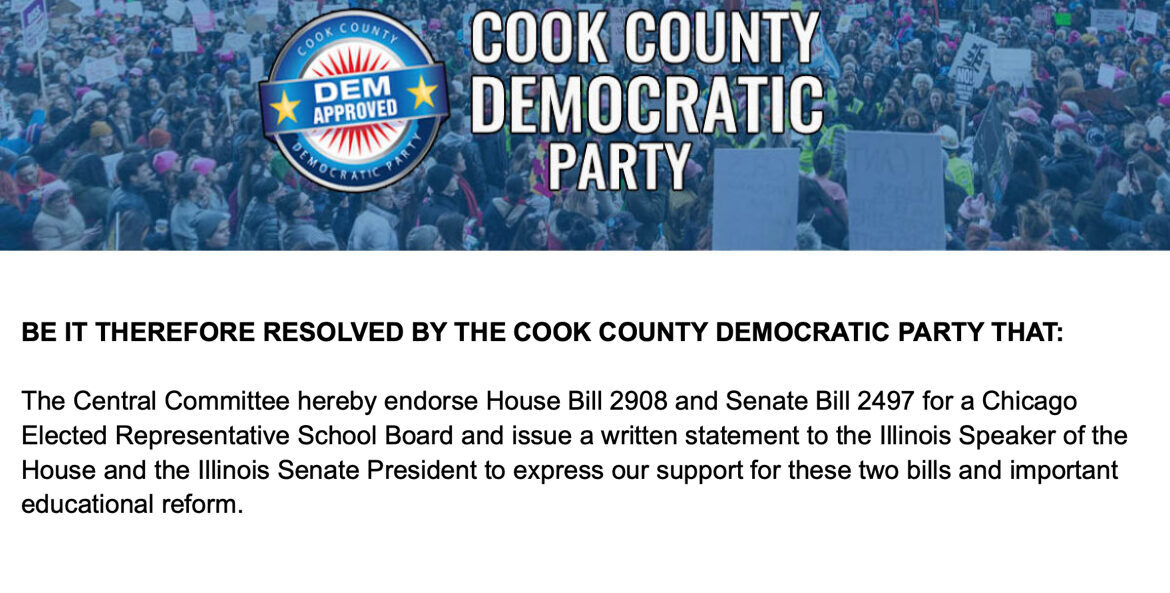 Following passage of the resolution supporting HB2908 and SB2496, Policy Committee Chair Anthony Quezada (35th) will send a written statement to the speaker of the House and Senate President notifying them of the Party’s support.

“What we’re doing as a party is uplifting the voices of 90% of Chicago voters,” explained Quezada. “We’re standing in solidarity with the teachers, families, students and organizations that have been advocating for this for years.”

Quezada said the Party also is showing its support for state Rep. Delia Ramirez (4th Dist.) and state Sen. Robert Martwick (10th Dist.), who are sponsoring the bills in both chambers.

Ramirez said the unilateral decision to close 49 schools in Black and brown communities are why an elected school board is needed.

“We would’ve had people fighting tooth and nail to make sure it didn’t happen,” said Ramirez. “So, when you think about our political party and the issues we say we represent and fight for, it really speaks highly that the Cook County Democratic Party would see this as a priority.”

Sen. Martwick said he believes an Elected Representative School Board illustrates a core fundamental value of our democracy.

“This is about righting a wrong and making a moral choice to give people the ability to chose their government and hold them accountable through the course of elections. And that’s never been given to the residents of the Chicago Public Schools District,” said Martwick.

Quezada said developing a policy agenda for the Cook County Democratic Party is a work in progress, but support for an elected school board is the right first step.

The resolution passed the Party with 93% of the weighted vote in favor.

Full text of the resolution is available here: