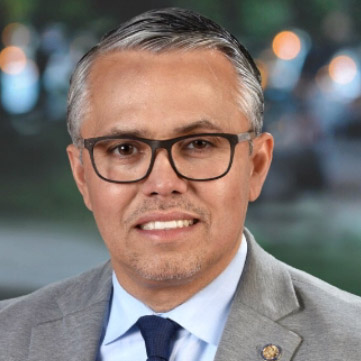 Alderman Gilbert Villegas has spent his entire career serving others. Since being honorably discharged from the Marines, he has served in government, non-profits, and for profit companies, each time successfully bringing new opportunities to businesses and employees. Since being elected in 2015 to the Chicago’s City Council, Alderman Villegas has introduced and passed legislation that focuses on providing opportunities for Minority, Women and Veteran Owned businesses. Most recently, Alderman Villegas led the charge to ensure that with the passage of the $8.5 billion dollar O’Hare modernization plan included an Oversight Commission that combines the efforts of the Latino Caucus and Black Caucus to ensure hiring practices represent the diversity of Chicago. Alderman Villegas currently serves as the City Council Floor Leader. Alderman Villegas created the first municipal Veteran Caucus in the United States and has recently worked with his colleagues to create a Veteran Business Enterprise program to offer the same bid incentives previously offered to Minority and Woman owned businesses. Alderman Villegas served as Chief of Staff position at the Illinois Capital Development Board, where he oversaw a staff of 140 State personnel, a $25 million operating budget and a $3.9 billion dollar capital construction program. As the construction management agency for Illinois state government, the Capital Development Board (CDB) oversees the construction of new state facilities and renovation and rehabilitation of the State’s 10,000 plus state-owned buildings containing more than 96 million square-feet of floor space. Prior to the Capital Development Board, Alderman Villegas served as Associate Director of the Hispanic American Construction Industry Association (HACIA). At HACIA he oversaw Government Affairs for the organization and spearheaded the development and lobbying efforts behind passage of two instrumental Illinois Senate Bills – SB351 and SB3249, ensuring minority and women owned businesses have a principal opportunity to participate on state funded projects. Alderman Villegas successfully created the Minority Contractor Training Program, which trained over 300 businesses that sought to perform on federally and state funded infrastructure projects. Prior to joining HACIA, Alderman Villegas served as the Deputy Director of the Office of Business and Workforce Diversity at the Illinois Department of Transportation, ensuring minority owned businesses were able to participate in the $2.2 billion dollar infrastructure program. As the Deputy Director he oversaw two departments: the Bureaus of Small Business Enterprises and the statewide District Equal Employment Opportunity Contract Compliance Officers. Alderman Villegas is a U.S. Marine, and served during Operations Desert Shield and Desert Storm. Alderman Villegas was assigned to the 2nd Light Anti-Aircraft Missile (LAAM) Battalion in Yuma, Arizona prior to his deployment. After being honorably discharged, he attended Northeastern Illinois University where he studied Political Science. Alderman Villegas currently represents the 36thWard, which is located on the City’s Northwest Side encompassing the diverse neighborhoods of Belmont Cragin, Dunning – Schorsch Village, Hermosa, Montclare, and Portage Park. He is the Chairman of the Economic, Capital and Technology Development Committee and sits on eight other committees: Committee on Aviation, Vice Chairman of Committees and Rules, Budget and Government Operations, Finance, Contracting Oversight and Equality, License and Consumer Protection, Worforce Development and Zoning, Landmarks and Building Standards.